Generations ago, a group of Hungarian colonists camped in North-Eastern Romania, on the left bank of the river Suceava. Legend says after the founding fathers asked for settlement approval from God, the village was named Istensegíts (lit. Thank God). Later on, name changed to Ţibeni, which comes from Ţibu, a common name in the village. Every summer, a fragrance of flowering locust spreads over the village. When the wheat begins to ripen, the hills surrounding Ţibeni village turn golden. Grain is taken to the water mill located outside the village.

Carriages from far and near loaded with sacks of grain and flour have pulled here for a long time. The flour mill never ceased to be a vital asset to the community, hence the mill is perfectly preserved, though well over a century has passed since it was built on the fast flowing waters of the Suceava river by a Hungarian local man. It involved digging a channel and deviating the flow of water.
To think that the wheat mill is up and running after 100 years, is heritage at it’s best, a wonderful example of local history. It is a genuine working water mill, where flour is made from local grain, powered only by clean energy provided by the flow of water. 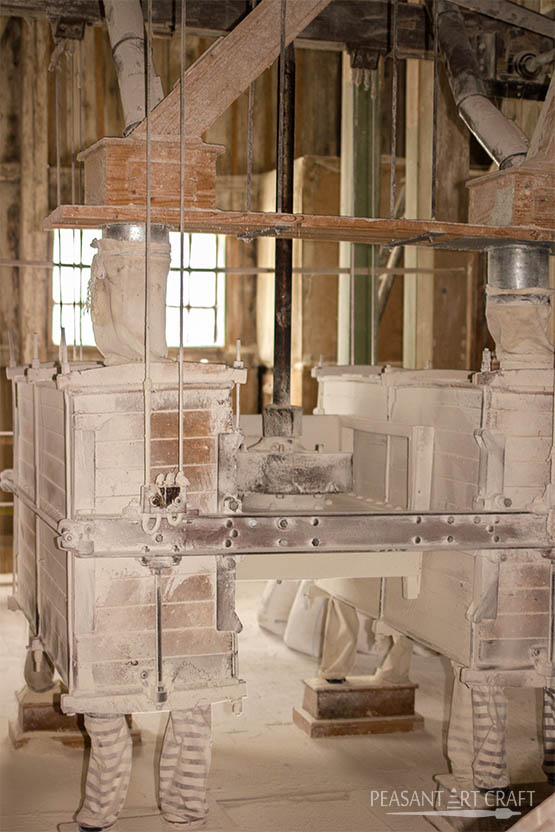 The mill uses an old Francis water turbine,  the most preferred hydraulic turbines, especially in hydroelectric power stations. It has been in use for over 80 years. It’s power output of 120 hp, about 85 kw, is enough to cover the mill’s power consumption of 65 kw.

Here, the main shaft powers the cleaning, grinding and filtering mechanisms through a series of wheels and driving belts.

The mill is a complex mechanism, made of a set of parts working together, operating on mechanical energy. The only time they use electric power is when they switch on the lights.

A thin layer of white, slightly salty powder covers the surface of all objects, machines and floor. This powder can ignite easily if proper precautions are not taken or if the air is not dry enough. A sweet fresh smell of crushed grains filling the air evokes childhood memories.

At the bottom floor, wheat grains pass through three machines, which eliminate the grain dust and grind the grains. Each one of these three machines is of different origin: a Hungarian, a Czech and a Romanian fully operational museum pieces. The first machine removes the dust with a centrifugal cleaner and breaks the grains. The grains are then delivered via mill spouts (wooden chutes) to the floors above for filtering and back to the second machine for breaking the grains into smaller pieces, which are delivered again to the top floors for sieving and back to the third machine for grinding. The flour passes again through spouts to reach the sieves for the last time, before being delivered to the ground floor for bagging. It is highly appreciated for being additive free and used by bread bakeries nearby, to make the healthiest artisanal country bread baking recipes.

We take the stairs up to the first floor. There is a selection machine which separates wheat from the chaff. On the second floor, there are the sieves, which separate grains of different sizes from unwanted particles and sifts the flour.

With the mixing mill grinding grains at a slow speed, the low heat that occurs within the mixing mills won’t give a burning smell to the flour as it happens with faster mills or millstones grinders. The production capacities of the water mill vary from 10 to 12 tones per day.