A peasant’s existence was based on linen, cotton and hemp processing. Women were trained into traditional fiber arts since childhood. Hemp fiber was often used to make towels, peasant blouses for men and women, tight summer pants for men, ropes and different items they needed to wear or use on a daily basis.

The seeds are planted in early spring. Early planting produces tall crops. Best time for harvesting stalks from the male plant is in the summer, before it is quite ripe or changes color. For obtaining high quality, soft fibers, it is pulled when it’s somewhat green, before it reaches maturity.
Harvesting was a duty of the peasant women.  The hemp was tied into sheaves. They were left to dry on the field, in the yards or leaning against the fences. Then the dried leaves were shaken off.
Processing Bast Fibers
Hemp processing involves separating the fiber (the bast), which is the outer portion of the stem, from the wooden core (hurd).

Retting
Retting is the process of allowing microbes to dissolve or rot away the cellular tissues and pectins surrounding the bast-fiber bundles. It facilitates separation of the fiber from the stem.
The stalks were immersed in the creek for a week. They used to hit the sheaves against the water to wash off the impurities.

Water retting was a labor intensive process, which required constant monitoring. During storms, they were running to the creek to save their hemp before being taken by flood waters.
Each family had their share of hemp marked with a sign, a piece of fabric tied to a stick. To recognize it, the fabric was usually ripped off from a blouse crafted by the peasant woman. So convenient for other peasant women to sneak and copy the motifs, then design their blouses with the “borrowed” motifs, adding their own style. When they wanted to embarrass a rival, they were sewing the motifs on a work blouse.

After a week, the hemp was taken home and dried in the sun.
The wooden core is removed from the fiber with a hemp break, operating with a swingle made out of a single log (or with double blade) for scraping and beating fibers.
Hemp Processing – Heckling Hemp 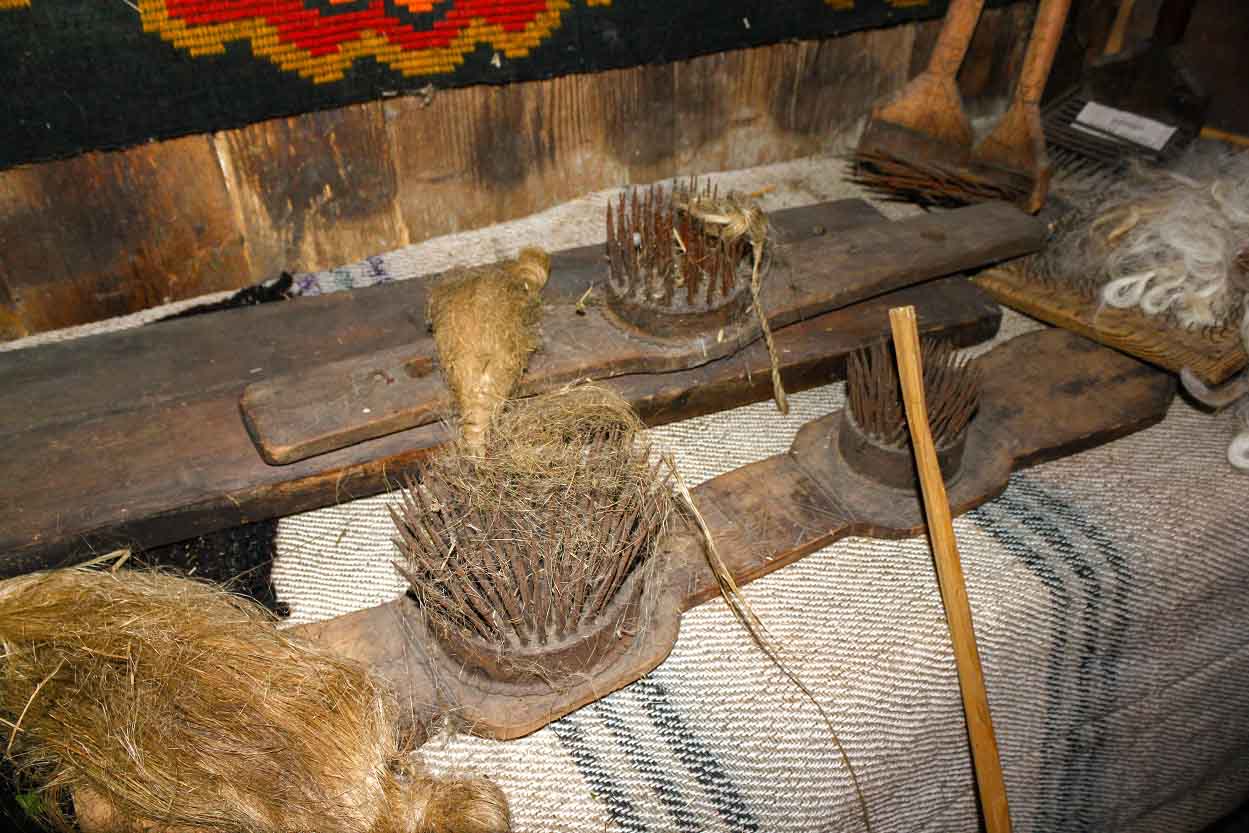 To divide and remove the remains, they must be drawn through a heckle. Next comes spinning hemp into yarn  and winding into circle, to keep it from tangling.

They put the fibers inside an open top barrel, made from a single piece of wood, with ash spread between them.
Wooden sticks are slid through the holes punched in the barrel, at 6″-8″ distance from the bottom. The yarn is placed on these sticks and not on the bottom of the barrel.

A loosely woven fabric is placed on top of the barrel, allowing water to pass through it. Then, they pour 15 lbs of dry ashes over the fabric and spill hot water.
The lye water drains through a hole in the bottom of the barrel. It is a natural and safe way to clean and whiten the fibers. The process must be done 5/6 times a day, for a week.
After a week, they were washing the threads in the creek, then left them dry in the direct sunlight. After weaving the fabric, they were drying it in the sun repeatedly, until it was getting white.

Top 5 Hemp Properties That Make it a Top Quality Textile

Hemp is beneficial in so many ways, and here are the most important five proven hemp properties that makes it far superior than any other synthetic and even vegetable fabric.

1. Hemp Clothing Keeps You Healthy and the World Toxic-Free
Unlike cotton crops, which are easily damaged by pests and need a lot of pesticides, which are released into the environment and, ultimately, into our bodies, hemp crops require no pesticide to grow.Being a natural fabric, made from the bast fibers of Cannabis Sativa, hemp is totally biodegradable.

2. Hemp Clothes Will Last Longer and Save You Money
Hemp fabric has been found in tombs dating back to 5000 BC. Due to it’s strength, for hundreds of years, ship sails and ropes were made of hemp.
Before the collapse of communism, the traditional textiles of Romania were produced from plants grown by peasants in their own gardens. They made sustainable clothing for their families. Now, after a hundred years, their vintage and antique garments are still in good wearable condition.

3. Hemp Protects Against Insects, Fungi and Bacteria
From their personal experience, peasants know that traditional textiles, like rugs and carpets, made of a combination of hemp warp and wool weft, are mothproof.

Sprays made from hemp leaves kill many insects. This plant does not require pesticides to grow, it acts as it’s own pesticide, herbicide and fertilizer.

4. Hemp is Comfortable and Resistant to Ultraviolet Light
Being a breathable material, it improves the comfort of the wearer. Hemp insulates against cold or hot conditions. Furthermore, it can absorb up to 30% of it’s weight and dries quickly. Hence, it is used in the production of diapers.

After the introduction of industrially available fabrics and threads, the old methods of processing hemp fibers were lost. Hemp prohibition has eventually led to the cessation of the hemp production in the USA and throught Europe.