A few days back, I wrote about our visit at traditional weaver Aurelia Cârdei, who was happy to show us how setting up a loom for weaving, loom warping and weaving warp faced bands are done.

Today, we  see how she dresses up the floor loom for weaving.
In an industrial society, where Chinese products are a dime a dozen, weavers like Aurelia Cârdei are very hard to find. Once in a blue moon, we run old style textile artisans like her to earth. Aurelia learned to weave from her grandmother.

She shows a few recently made woven bands, explaining that the patterns are maybe a hundred years old. These patterned belts are worn with the Romanian peasant costume. Women tie their traditional aprons around the waist.

How To Warp A Loom From Back to Front

She brings the warp, which was already wound and tied in a whole lot of places. She slips the loop at the end of the warp onto the tie on rod.
Then, she inserts the lease sticks into the cross and ties them securely together. This keeps the threads in the correct order.

With two cords, she hangs the lease sticks by the top of the loom. The ties, which hold the cross are removed, and it’s about time to wind the warp.

Loom Warping With The Help Of Her Niece, Who Is Eager To Learn The Secrets Of Weaving

This process requires two people: one to hold the warp firmly and the other one to wind on. With the help of her niece, who is eager to learn the secrets of weaving, she winds the warp onto the warp beam, inserting wooden sticks into the warp, to keep the layers separated.
When the warp is completely wound onto the warp beam, it is restrained by use of a stick (slobozitoare), inserted into a hole in the head of the beam.

The two shafts are each formed of two horizontal sticks, connected through the whole extent by numerous small heddles of an equal length.
Each heddle has an eye in the center, where the warp is threaded through. 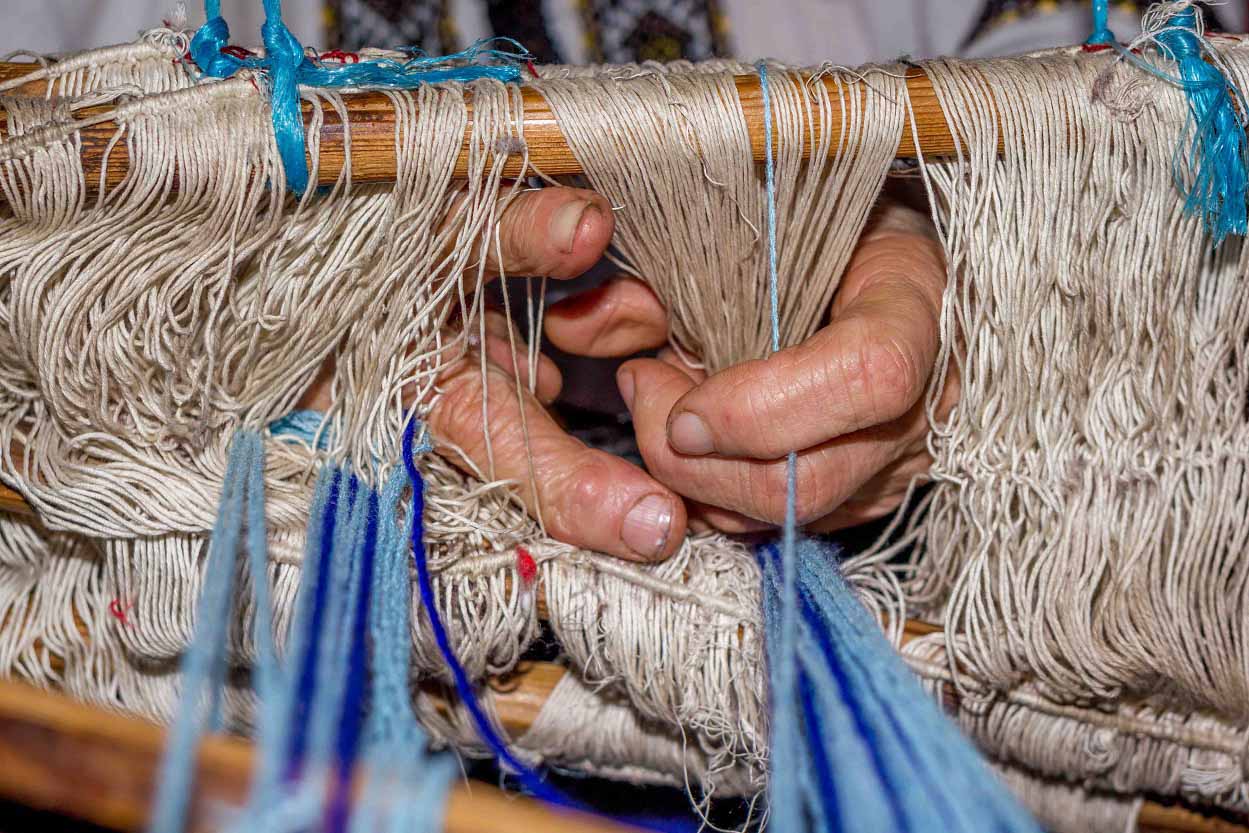 She takes each thread in order, as they come off the cross. A thread is passed through a single shaft, switching the shafts with each thread that is taken. You don’t pass two threads in row on the same shaft.

The foot pedals are hanging by strings from the shafts. When one pedal is pressed,  it lowers shaft 1, which draws the rope looped around the pulleys, which lifts shaft 2.
After threading the whole warp, the warp is tied in small sections to the tie on rod at the cloth beam and the traditional artisan starts weaving patterned bands.