Nestled among the Bukovina Ridge, seven kilometers away from Gura Humorului, is the town of Frasin, where rural and urban characteristics combine, agriculture being of prime importance to local people. We came here not attracted chiefly by the beautiful mountain-scenery, or by the remarkable Voroneț Monastery, one of the Painted Churches of Moldavia listed in UNESCO, where it’s always a pleasure for us to return, but because here lies an old tannery, straight out of medieval times, where the art of pelt tanning is still practiced.

It was late morning when we stood outside the tanner’s home. It was quite a small farmhouse standing back a little way from the road in a neat garden. Nailed upon the barn, an old signboard, with the text “tannery” written in it, informed us that we had reached our destination. We went along a stepping stone pathway, through the open barn door and into the backyard, where we were greeted by the tanner’s wife, Ştefania Cosmațchi, a very friendly lady, with a zest for life, and eyes gleaming with energy.

Under an open shed, Cosmațchi Viorel was standing next to a huge paddle tank, loaded with dozens of animal skins soaking inside, as the paddles kept turning over and over.

The view was magnificent from the backyard. To the left, the straggling town curved its last wooden cottages. To the right stretched a beech wood. Between wood and town were fields that lay in a golden wash of sunshine. The old tannery brought the perspective of passing years in a world that had accelerated beyond sense, a picture straight out of medieval times. It was a rustic place, the kind that brought the feeling of time weathered and recycled.

Mr. Cosmațchi had been all action, never slowing for even a day. He had been dedicated to his work for sixty years. He learned this trade when he was thirteen years old, and grew to be much skilled in the preparation and finishing of leather.

“At thirteen years old, I began to work as an apprentice for my uncle, and I have been in the same job ever since. I am seventy-three years old. I never quit my job.”, said Mr. Cosmațchi.

He was tall, with strong arms, and wore a leather apron, handling and inspecting each skin with scrupulous care.

The pelt tanning process involves quite a few steps, from soaking and curing, to tanning and dyeing. But before tanning, the raw hides go through a series of preparatory stages. He began with curing the pelts by immersing them in a brining solution of salt and water, to prevent bacterial growth:

“About 50 pelts are immersed in a brining solution made of 55 lb salt and 132 gal of water.”, he explained.

Next, the salts left over from the curing were removed in a process called soaking. This process involved soaking the skins in a solution with chemicals, added to prevent the growth and spread of germs. Working with chemicals is a dangerous profession. The tanners are always at risk of developping cancers, which is why mr Cozmatchi prefers to work in an outdoor setting.

Next, the tanner fetched the skins from the paddle tank to the fleshing machine. “ The complete removal of fleshy tissue and fat is highly effective in the tanning process, he said. In this stage, the pelts were scraped through a machine that uses rotating rolls to remove fleshy tissue, while rinsing them in the same time. Next, they were soaked again in baths containing acidic salts and tanned with chromium tanning agents. The resulting color is blue, and is known as wet blue. “After tanning, the pelts are hanged on a rope until they dry off.”

Then they were gathered and loaded inside a big wooden tumbler. “I put them in the tumbler with sawdust. This procedure will moisten and soften the hides. This process can last up to four hours. They must get heated and soften a little.”, he said.

He took them out and headed to the stretcher machine. “This one makes pelts stretchier and softens the leather. They already came out stretchier,” he said, while stretching out a piece of leather.” Next, he fetched the pelts to the same tumbler as before, to degrease them with sawdust and gasoline. Then they went inside a machine with a rotating cylindrical sieve, to separate the sawdust. Polishing followed, that gave the leather a clear and clean aspect.

In the end, the pelts were completely dried before being ready for use in making products, like the most cherished sheepskin vests and jackets, which are distinguished by their original artisan leather, bright and elaborate colours, and specific, traditional patterns.

Altogether, pelt tanning involves five stages, each one requiring many different manipulations, which make leather tanning a rather complicated process. 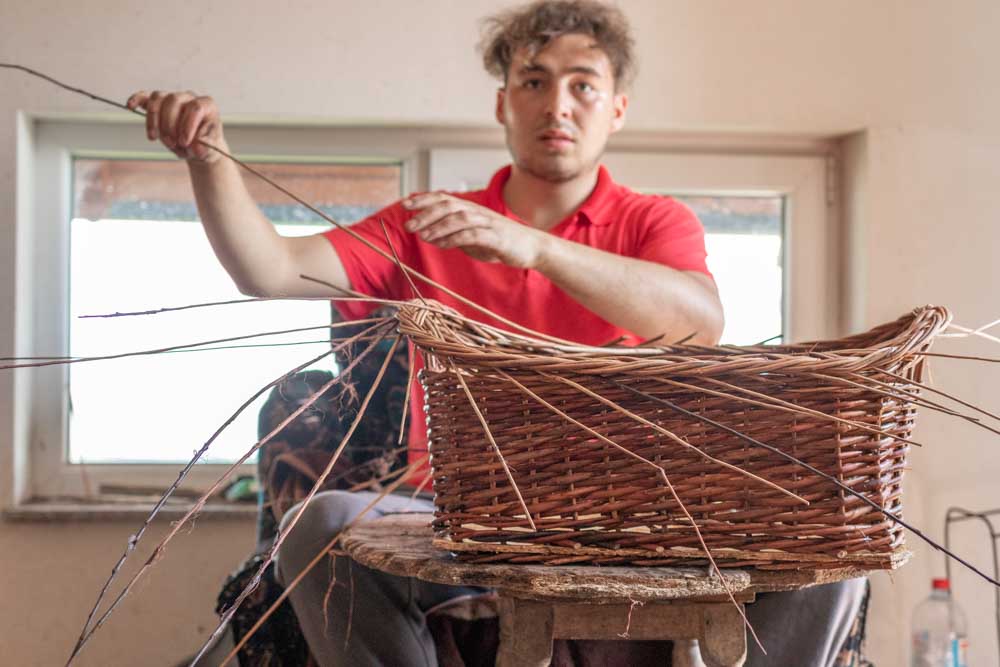