Setting Up a Loom for Weaving: Assembling the Parts

Setting Up a Loom for Weaving: Assembling Floor Loom Parts and Accessories

In the video above, Romanian artisan Aurelia Cârdei is setting up her loom for weaving. We met Aurelia the week before Christmas, in the village of Bilca, Suceava County. By that time she had already disassembled the loom to free up some space for the winter holidays. She estimated the loom is 70 to 80 years old, explaining  it was given to her by an old lady. With the help of her husband, they assembled it in less than 30 minutes. This short video shows Aurelia Cârdei setting up a loom for weaving, the loom warping and weaving will be shown in the forthcoming posts.

Consumers seem to be more and more interested in some very slow and old weaving techniques, thus everytime we turn around, we find so many choices of looms. Ironically, it is the modern technology that’s making it easy for weavers to be in possession of tools and kits.
It’s so intriguing that some primitive looms, tools and systems are still in use in modern societies, despite the state of technology. 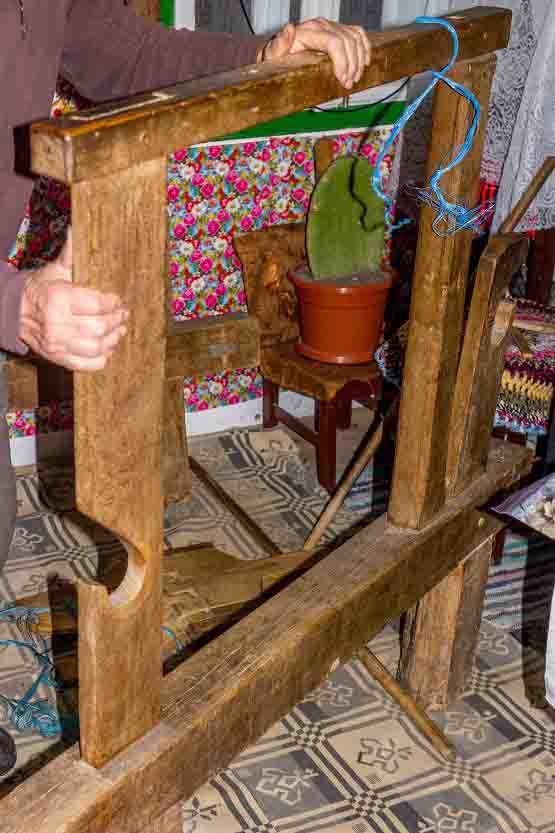 Traditional artisans have been either passed down from generation to generation, either built at home, originally rough-hewn with an axe and saw, later turned on a lathe. Counterbalance floor looms are most commonly found throughout Romania, especially in the region of Bucovina, where working with linen or making rugs has been a full time occupation, which required a firm, even tension of the warp threads.
The choice of wood was an important consideration in the construction of the traditional looms. Locals would prefer a strong, heavy wood, such as beech, to build stable looms, which would not slip around when battening.

A traditional floor loom is actually simpler than most of the industrially available choices of looms that we can find on the market.
To begin with, they would cut a big log into four vertical segments all the way down the length of the log. Side frame parts were shaped and joined with mortise and tenon joints.

The two side frames are assembled with two horizontal bars (tije) in wedged mortise and tenon joinery – with wooden nails.
Two round cuts are carved out of each side frame, at the front and back, to receive the cloth beam and the warp beam.

The warp beam is turned with a hollow wooden tool (puciheș), which works like a crank handle.
The handle is manually inserted in the cylindrical head and turned, taking next hole as the warp is wound on the beam. When the entire warp has been wound, the warp beam is restrained by use of a stick (slobozitoare).
The same hollow wooden tool is used to restrain the cloth beam. It is inserted in a hole in the cylindrical head, and held in place with a perforated board (găureancă, borcileancă), which is restrained with a peg.
The beater hangs from the top of the loom and is kept in place by pegs fitted into holes. It will have at least three holes here for adjusting the distance.

Traditionally, the dents of the reed, which is held by the beater, were made of cattail plant.
A pulley system on top of the loom raises and lowers the harnesses.
The raising and lowering is performed through the use of foot pedals hanging by strings from the heddles.