Village of Viscri –Blacksmith Forges Metal Objects Out of Junk

The village of Viscri is nestled between the hills 43 km southeast of Sighișoara. From the main Brașov – Sighișoara road (E60), we divert down the road at Bunești for a bumpy ride along the 7 km potholed road, until we reach the main road of Viscri. It is extra season and we are the only tourists in the village.

A walk through the village is a great way to escape everyday routine and relax enjoying the Transylvanian countryside: chicken scratching in fresh dirt, geese grazing, pigs wallowing in mud holes. Aweing at the old, colored Saxon farm houses, some recently restored, we head to the fortified church,  an iconic landmark of Transylvania.

This is the first time we’re visiting Viscri, so we stop to admire each house facade bearing the year of construction. The authentic hand-tiled roofs add to the small village charm. Many houses – abandoned in 1989, following the collapse of communism, when the Saxon population left Romania – were restored and refurbished in a traditional Saxon manner. The rows of old and colorful houses are so beautiful to behold, that it is almost impossible to capture their beauty in photographs.

Following a small cobbled road, we reach the church eventually. The medieval church on top of a hill has strong defensive walls built up to defend the village. Being one of the 7 UNESCO Fortified Churches in Romania, the 13th century Romanesque church includes a museum and a church tower where visitors can ascend to enjoy an exceptional panorama view of the spectacular rural site surrounded by beautiful forest.

The small chapel, later used by Saxon occupants as a foundation for their own Romanesque church, was built in the 12th century by Szekely inhabitants. Although the opening hours are from 10:00 AM to 1:00 PM and from 3:00 PM to 6:00 PM, sometimes they don’t seem to respect the schedule, so it’s a good idea to ring before visiting.

As we come down the hill I spot a bakery sign down the small narrow streets leading to the central road. Unfortunately, it is closed in extra season. I try to take a look inside through a window, but I only see an empty space. We ring the bell, but no one comes.

Further down the road, some locals have put crocheted socks, sweaters, slippers and much more handmade articles out for sale on the large front doors of the houses. The local women knit them and they are special souvenirs for the many tourists who now come to their village as a result of Prince Charles’s promotion.

The Prince of Wales, who visits Romania yearly, has become the region’s ambassador, drawing crowds of foreigners, who come to eat local food and enjoy the countryside routine: riding a horse, milking a cow, visiting workshops.

We take the car to drive back a few streets away and park in front of house number 228. In short time, Gabor Istvan, the village’s blacksmith shows up in the doorway. I am glad to find him home.

Although our times are different than before, when farmers did field work with horses, the blacksmith has found a way to make a living doing what he loves. He now performs for curious guests who cross his threshold and sell little souvenirs: nails and horseshoe models. He makes iron hinges, copper cauldrons and, rarely, shoeing a horse.

If making a horseshoe doesn’t take more than 30 minutes, a copper cauldron can take up to 2 weeks to finish. It involves a lot of hammering.

As we step inside his workshop, I realize the modern world has not tarnished the raw charm of this place. Everything is kept as it was a hundred years ago. The forge blower is the oldest tool passed down to him from his grandfather, who got it from his father. 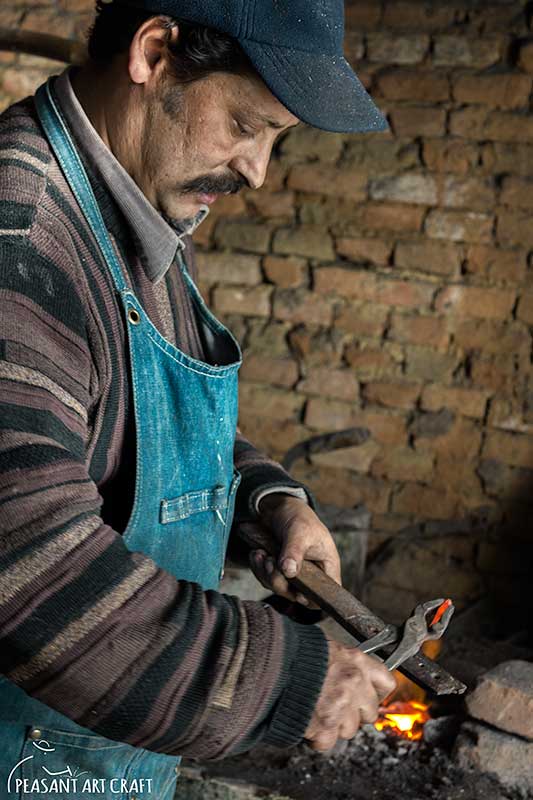 The family has been in this trade for generations. The techniques were passed down from one generation to the next to this day, being continued by Gabor Istvan and his brother, Matei, dubbed the „Gabor brothers”, or simply „the blacksmith brothers”. Although their children are no stranger to the trade, they still haven’t decided whether or not they will follow it.

The best thing, he says while grabbing a piece of iron, is to be able to turn someone’s junk into a brand new object. He throws it in fire to heat it up, while constantly blowing air to supply the fire with the forge blower, then begins shaping the horse shoe with an old hammer: